Should hemp extracts and CBD Oil derived from hemp be considered novel food?

The EU defines novel food as food that was not consumed to a considerable degree by citizens of the EU prior to 1997, when the first regulation on novel food came into force. Novel food can be newly developed, innovative food, food produced using new technologies and production processes, and food traditionally eaten outside the EU. The regulation requires such foods be safe and be properly labeled so as not to mislead consumers, among other requirements. The upshot for food producers is a more burdensome marketplace as novel foods undergo stringent and costly authorization requirements.

Hemp flower products such as hempseed and hempseed oil (extract) are authorized novel foods under EU rules, exempt from registration due to demonstrated consumption in Member States prior to May 1997.

But the recent language changes to the Novel Food Catalogue state that “extracts of Cannabis sativa L. and derived products containing cannabinoids, including Cannabidiol (CBD), are considered novel foods as a history of consumption has not been demonstrated.”

During the March 12 session, however, EIHA rebutted that argument, for starters citing a Nova Institute survey (1997) ordered by the EU Commission in which 23 companies from across Europe reported a total of more than 255 tons of hemp-based foods as having been produced before 1997. Those products obviously contained CBD, the EIHA contends.

What are hemp extracts? (focus on Cannabidiol)


Cannabidiol (CBD) is the most abundant cannabinoid naturally present in the industrial hemp plant and their extracts. It is non psychotropic, non-intoxicating, not addictive & very well tolerated by humans even in large doses

How hemp extracts are made from hemp plant?


The extract can be left raw or decarboxylated and added to consumer products without further processing.

Extracts are usually winterized in order to remove plant waxes


On the 20th of January, 2019 MSs and COM agreed on a new wording for the Novel Food catalogue

Food Business Operators in EU have been acting in GOOD FAITH based on guidance represented by the information provided in Novel Food Catalogue àinvestments.

Catalogue item Cannabidiol has provided a clear guidance: products with “natural“ levels of CBD have been considered “traditional“

Only traditional propagating practices are used for processing hemp infructescense


Such practices include pressing or solvent extraction

Presence of cannabinoids in human diet is also well documented across middle ages to the modern age. We will demonstrate it on 14 examples.

Inscriptions on the Tower of the Escape, Bologna

Constructed from 1220, the vault of the Canton de ‘Fiori carries the following Latin inscription: 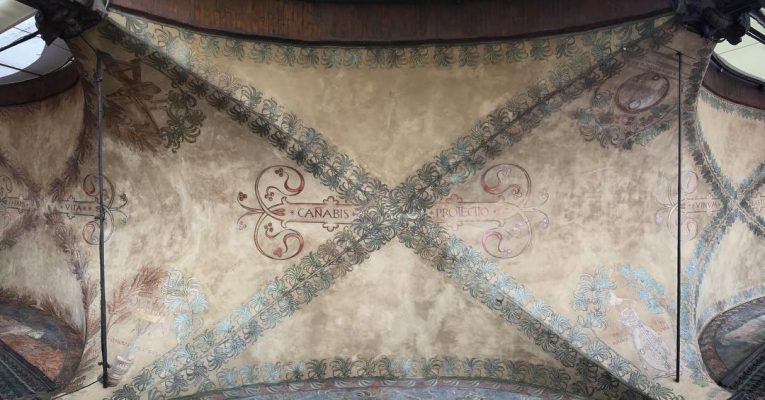 “Bread is Life / Cannabis is Protection*  / Wine is Joy”

Use of aerial parts of the hemp plant within European perspective is CLEARLY demonstrated by two citations from [one of the oldest] cookbooks De Honesta Voluptate Et Valetudine, published in 1475 AD by Bartolommeo de Sacchi Platina 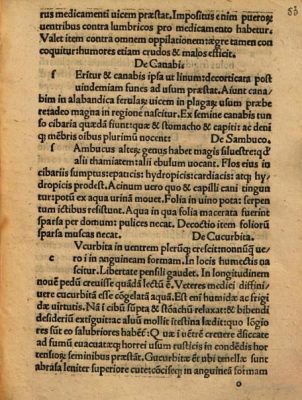 To make cannabis yourself known as flax for thread. Use a mallet to crush clods collect after good harvest Taken as food in wine or cake. Add cannabis to nard oil an iron pot. Crush together over some heat until juice.

A health drink of cannabis nectar. Carefully treat food and divide for the stomach and the head. Finally remember everything in excess may be harmful or criminal.

Boil flowers and leaves (canapo) in water.Once ready press them to mixture with bread crumbs and cooked onion. Slowly add the water in which canapo was boiled to the mixture and add saffron and spices. 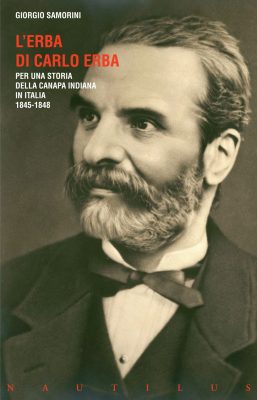 Carlo Erba focused his studies between 1945 and 1958 on hemp extracts.

Erba after having analyzed these two methods,  proposed the ether extraction as with ether there is no need for heating, no need to use metals and acids elements that could alter the hemp properties.


Moreover in his book, Doctor Erba mentioned the studies of Doctor Valerzi (from university of Naples) that studied hemp extracts with fat and honey (1887).


It is written that in July 1887, Valerzi went to Veneto region in Italy and harvested Sativa hemp. From the harvest Valerzi extracted distilled water, essential oil, tinctures alcohol, syrup, liquors, decortications and instilled. 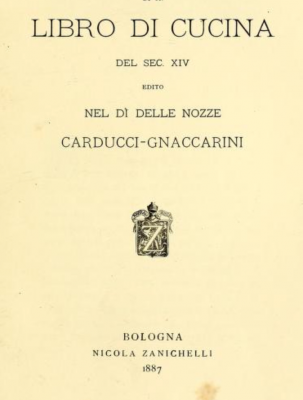 Take the hemp flowers without leaves and cook them with bacon. When the bacon is almost cooked add the flowers, finish cooking, chop everything, add grated cheese, as much as the mixture and with this filling, make the tortelli. (recipe dated 1884). Source: Frammento di un libro di cucina del Sec. XIV : edito nel di delle nozze Carducci-Gnaccarini” 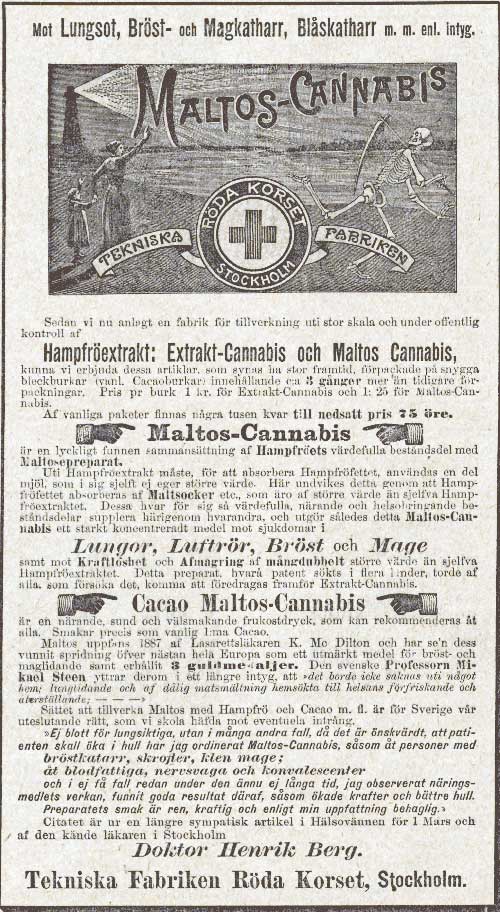 This ad confirms that hemp extract was used in the preparation of Maltos Cannabis nourishing food remedy.

In Sweden until the 1930s, the Red Cross sold the patent medicine Maltos-Cannabis, as a strengthening breakfast drink. Above mentioned advertisement in Aftonbladet 1894. 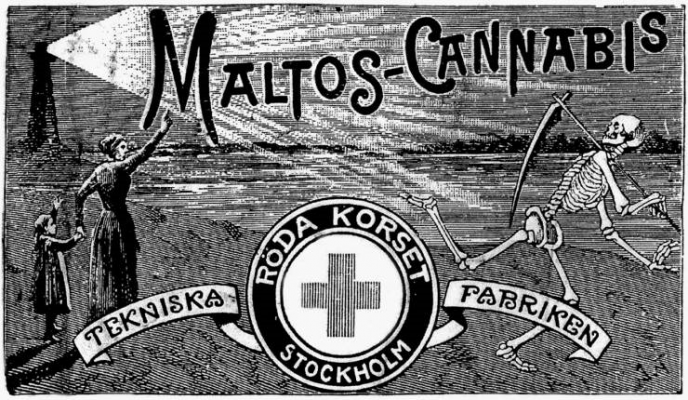 Exhibition was held from 5 May to 5 November 1894 attracting 3 million visitors.

During the famine suffered by both the inhabitants of Polish Siberian villages, as well as users of the north-eastern Polish borderland, ate different grasses. From these “edible” grasses, the inhabitants of the Widzew exchange osyt, and lituanizm v’iksva ‘sedge’, pokšyva ‘nettle’, hemp ‘hemp’, šn’itka

Kouopiew “Accounts” are often mentioned as hemp (semen canapi), on fast days. We already know that oil was thrown out of them, but it can be used to prepare the soups, eaten here and now here and there with us, especially for the evening on Christmas Eve, but they do not tell us “Bills” of Hemp were grown in royal estates, but at the market were also bought.

However, the greatest admiration must be aroused by the number and variety of used vegetables and garden plants (Vegetables). Among them the most popular were: red beets, onions, horseradish, garlic, grysz, later unused, kucmorek (kucmorka) eaten in a great post, peas, cabbage, hemp, cumin, dill, poppy, carrot, cucumbers, parsley, turnip, radish, cress, lentils. The above set indicates that Polish medieval cuisine was exceptionally well stocked with vegetables and vegetables, and their use was quite common (Peszke 1904, No. 9, pp. 133-134). 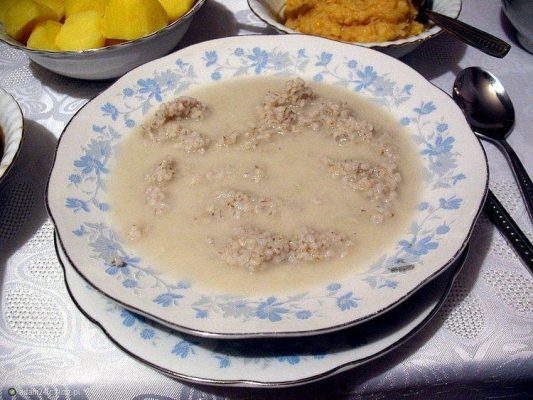 Siemieniotka is a Silesian soup made of hemp seed, often eaten at the traditional Christmas Eve meal 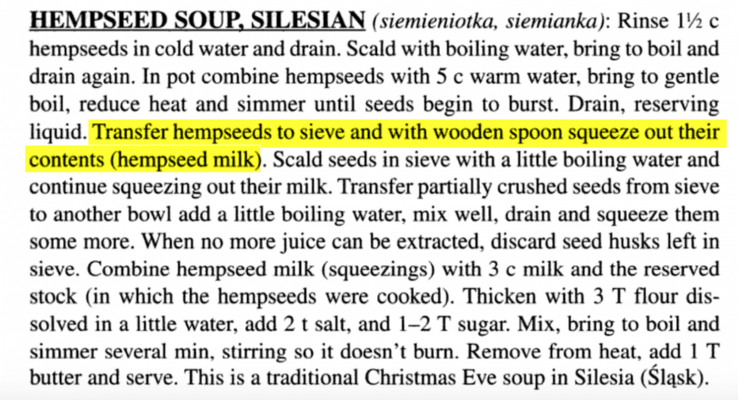 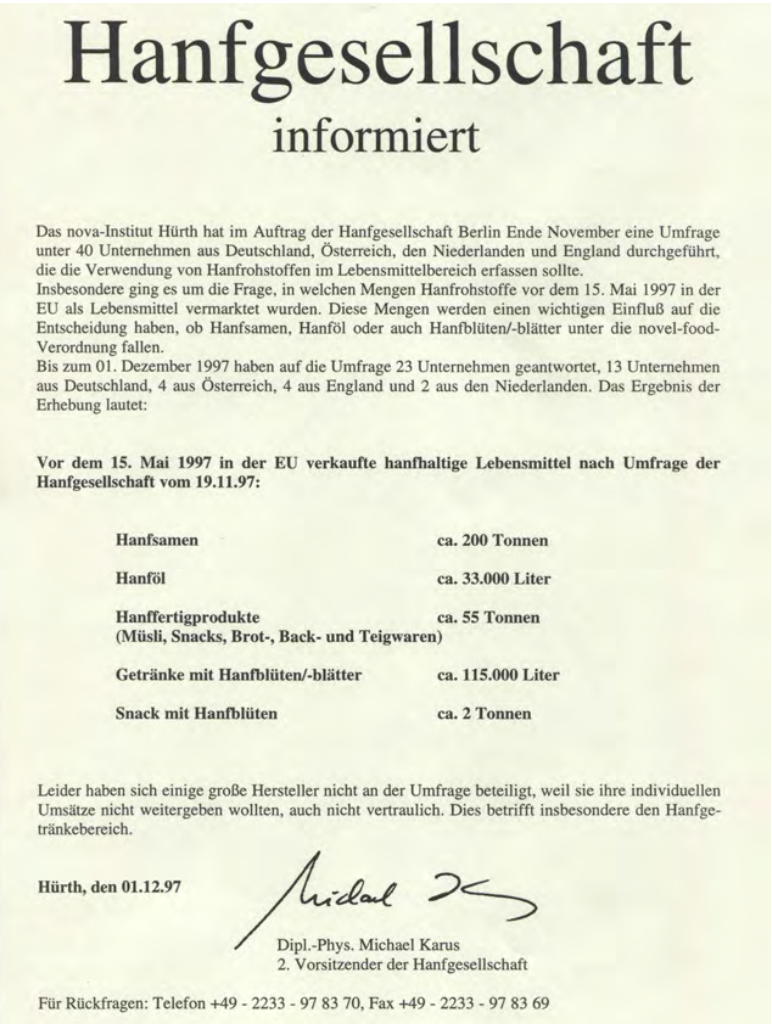 The Nova Institute was commissioned by the Hanfgesellschaft to undertake a survey on the request of EU Commission to obtain data on volume of hemp products sold prior to May 1997.

Out of 40 companies contacted, 23 companies from Europe, including Germany, Austria, the Netherlands and the UK responded:

The letter also states “unfortunately several large hemp companies did not participate in the survey because they did not want to share their data, especially from the drinks sector.” 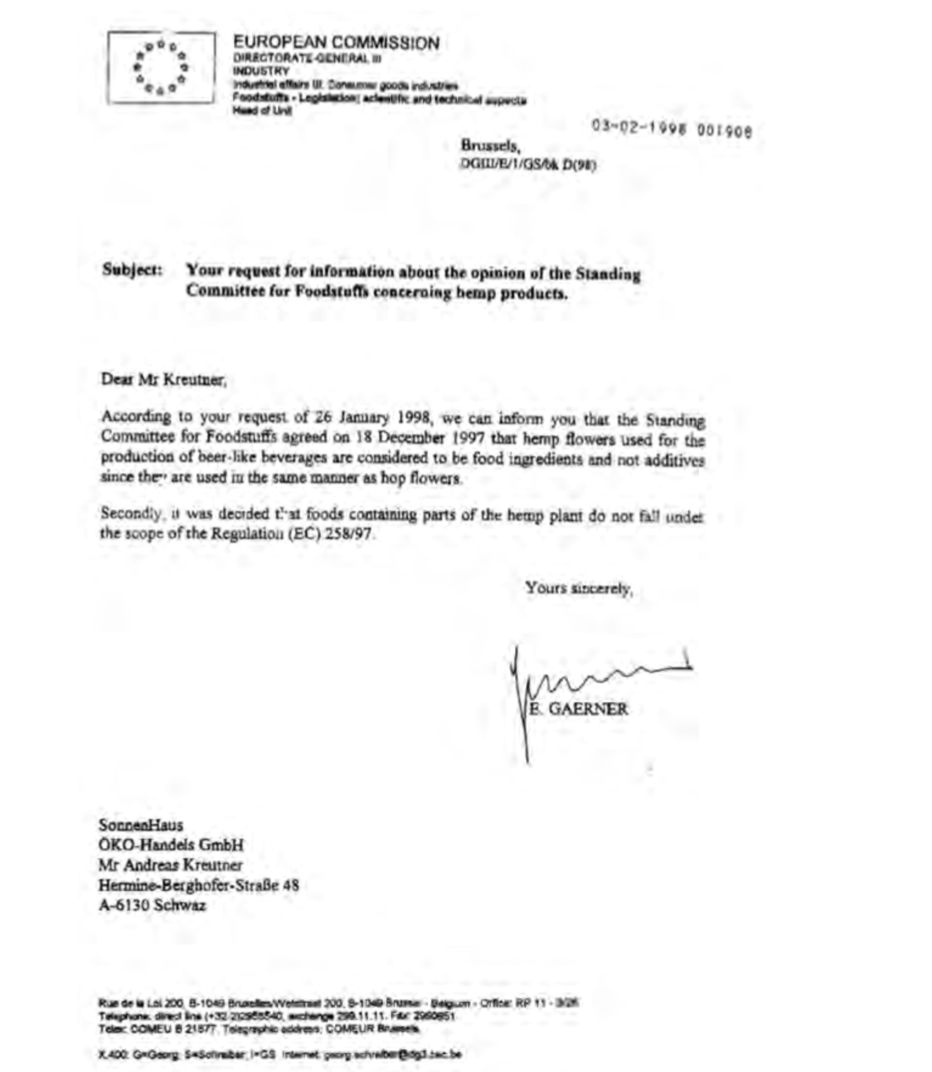 The letter of European Commission, dated 03.02.1998, to Mr Kreutner (Öko-Handels GmbH, Austria) stated “that hemp flowers used for the production of beer-like beverages are considered to be food ingredients and not additives since they are used in the same manner as hop flowers.“

“Secondly it was decided that foods containing parts of the hemp plant do not fall under the scope of the Regulation (EC) 258/97.” 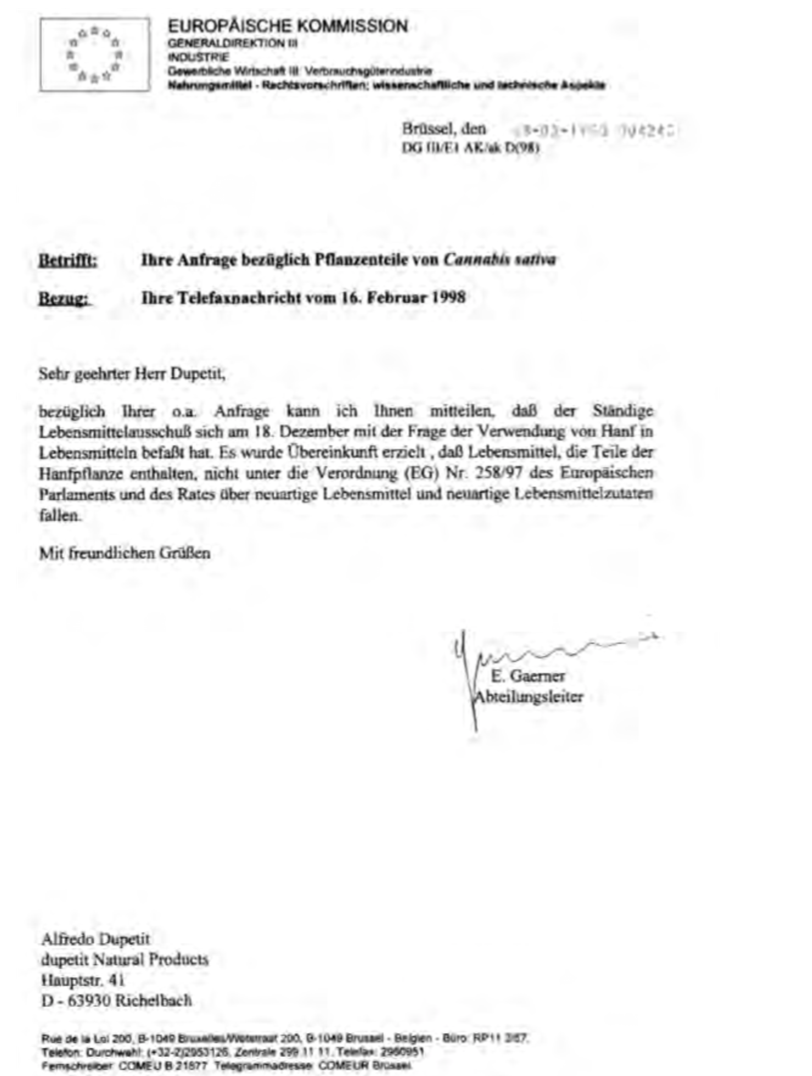 Letter of the European Commission to Mr Dupetit, dated 03.03.1998, saying the Standing Committee on Food agreed on 18.12.1997 that foods which contain parts of the hemp plant do not fall under Regulation (EC) No. 258/97 …… on Novel Food and Novel Food Ingredients.”

Official use of hemp leaves for making teas can also be demonstrated on a case of Slovak Republic:

SLOVAKIA – DECREE 09/2015 Z.z. of Ministry of Agriculture and Rural Development of Slovak Republic, of December 4, 2015, on spices, table salt, dehydrated food, soup preparations and on aromas contains item konopa siata – Cannabis sativa L. – leaf, seed in Annex III, Table 1:
LIST OF PLANTS AND THEIR PARTS SUITABLE FOR PRODUCTION OF TEAS without recommending any restrictions on the amount [of herb] used.

One will surely not question that hops, its flowers, leaves and whole tops are used as food, ingredients and extracts.

…then it must be considered a traditional product, not Novel Food needing pre-marketing authorization

products which do not comply with any safety, labeling or compliance standards.