Update on the novel food status of CBD

We have been following the status of CBD in the Novel Food Guidelines since 2013. Three different entries have followed, as well as an attempt by the European Commission to re-schedule CBD as a pharmaceutical. Good news arrived with the ECJ (European Court of Justice) ruling in the Kanavape case

In this article, we give you an overview of what the landscape looks like, and what we think will happen next.

What is “novel food”?

According to Regulation (EU) 2015/2283, Novel food is defined as  “[food that was not used] for human consumption to a significant degree within the Union before 15 May 1997 (…)”
This means that if a company wants to market a new product, it must be proven safe for human consumption first. This is done via a Novel Food Application with the EFSA (European Food Safety Authority). A novel food application is accompanied by a dossier that contains research in regards to the possible toxicity of the food in question. If a novel food is deemed safe for human consumption, it will be granted a ‘premarket authorisation’. This lets countries know they can allow the foodstuff to be sold.

The Novel Food Guidelines are public and can be searched through here:

The entry for Cannabis Sativa L. results in a green checkmark with the text: “(…) parts such as seeds, seed oil, hemp seed flour, defatted hemp seed have a history of consumption in the EU and therefore, are not novel.” 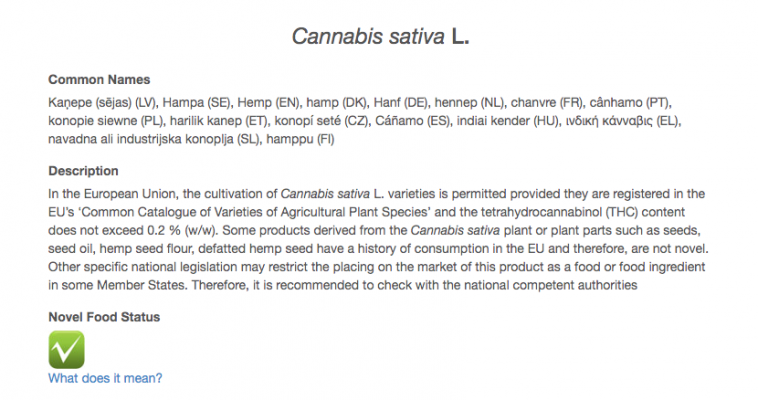 However, a separate listing has been created for Cannabinoids with a big red cross and the text: ‘(…) products containing cannabinoids are considered novel foods (…)’ 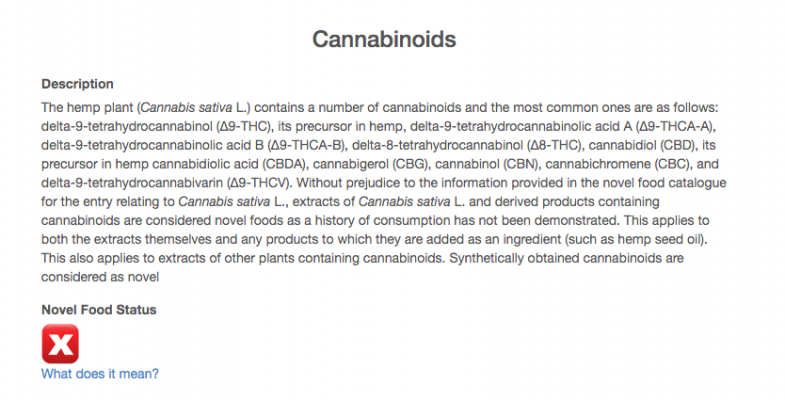 These entries are “demonstrably incorrect” in the words of EIHA (the European Industrial Hemp Association) “the new entry for Cannabis Sativa L. does not mention hemp leaves and flowers. Extracts are also missing, even though extraction is considered a traditional and conventional method of food processing.”

EIHA goes on to clarify that “​​extracts with a naturally occurring level of cannabinoids are now excluded, although they were mentioned in the previous entry formulation. Such products were already on the market and consumed before 1997 to a significant degree.”

Recently, a ruling was recently made by the ECJ (European Court of Justice, the highest EU judge) In Kanavape vs France (Case C-663/18), the ECJ has ruled that “a member state may not ban the marketing of cannabidiol (CBD) when extracted from the Cannabis Sativa plant in its entirety.”

The ruling is remarkable in how much information it provides regarding the position of the ECJ on this topic. It confirms that CBD products cannot be banned from sale in an EU country if they are for sale legally in a different EU country.

The Commissioner for DG Sante, the Directorate-General for Health and Food Safety in the European Union, has mentioned recently that no feedback on the toxicology dossier, submitted by EIHA to the EFSA, is expected before the end of 2023.

This is bad news especially for all the brands that have been waiting to receive market authorization through a sub-license.

All of this leaves the status of CBD as a food unclear again. We know the problem with novel food regulation will go away eventually, as member states are forced to adapt to the Kanavape vs France ruling. However, we see that more resistance can be expected, and the anti-cannabis lobby is strong as ever.

In the UK however, cold pressed oils have explicitly been allowed, and are not novel food in the eyes of the FSA: https://www.food.gov.uk/business-guidance/cannabidiol-cbd

CBD and Cannabinoids will remain a Novel Food in the EU, although not all member states follow the guidelines. In the UK cold-pressed oil is allowed for normal sales. The upcoming German legalization of Cannabis may bring benefits to the entire EU market.